The Cosmic Diamond Heart of the Feminine

On July 29th the Earth will be surrounded with 9 planets gathering in two triangles creating a six pointed star formation. We are calling it the Cosmic Diamond or the Diamond Heart, a portal to enter into the Great Feminine, as the planets align in the water and earth signs. It is a portentous time to gather and hold a vision for a new world, an evolving consciousness for humanity and each of us. The Grand water trine holds our dreaming of a new future, imprinting itself in the vibrational field encompassing the Earth. The earth element focalizes the dream into manifestation and practicalities.

Each Cosmic opportunity we have to gather and honor the songs of the planets and stars in their orchestration allows an anchoring of consciousness.

In this time of cathartic upheaval, of breakdown of the old hierarchical paradigms, of chaos that precedes new order, we have a collective moment in time, July 29th, to gather and honor the call.

How can we embody the potential of this time for the benefit of all? In the beginning of July we enter the gateway portal of the Grand Water Trine. It allows us to move into the inner worlds of our feelings and being. With Saturn in Scorpio we can pierce through, with concentrated effort, to recognize some “vital area within our feeling nature which must be examined, purified and released” Liz Greene. Saturn in Scorpio pressures us into an initiation if we are willing, to release the dominance of the personality needs and to move into the heart of being. To be transformed, renewed, by seeing clearly the truth of the interrelatedness of us all and to shift our being into accessing qualities of compassion and love. From that place then, wisdom arises directing our actions. We are enacting a collective death and resurrection, a new human.

Through July 20th, Mercury is retrograde in watery Cancer, having us move into the undercurrents of being, and tapping into the deeper motivations of our actions. The quest is to create enough space to listen and contemplate the quality of our lives. What’s working and what is not working? If life seems suddenly very complicated and nothing seems to be working smoothly then we must STOP and dive into the invisible realms and realign. The body will tell us. As Mercury goes direct, it aligns with Uranus and Pluto, letting each of us know what we need to let go of and what will serve our awakening.

Pluto in Capricorn enhances the grand Water trine into the form of a kite, with its tail anchored by Jupiter in Cancer. With Jupiter in its sign of exaltation (once every 12 years), we enter a frequency of greater wisdom and opportunity to understand our earth family, the human tribe, and to create a foundation and home for the psyche that is stable and nurtured. With Pluto at the head of the kite, ways of structuring that consciousness are transformed. We are dancing with Kali and Shiva as they restructure our understanding of who we are.

Mars enters watery realms of Cancer on the 13th, heating up the alchemical soup. We must align ourselves with the Spiritual Feminine Warrior. Listening deeply to the inner promptings of our psyche, thinking and pausing before we speak and act, as Mars activates unconscious responses and defensive actions. From the 27 through the end of the month, Mars actives the great Uranus Pluto square, intensifying rebellions, and breakdown of order, and energizing our desires for and actions to shift the paradigm. 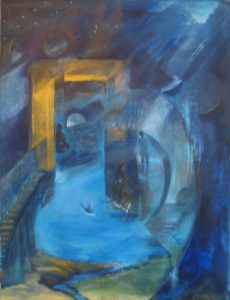 On Monday, July 29th, as Venus and the Moon align in Virgo and Taurus, the portal opens to the Cosmic Diamond, the Diamond Heart, the Grand Sextile, the potential for humanity, and earth to align with the evolutionary call of the cosmos. “The sextile is a symbol of practical effectiveness…. the conscious integration of the will to create with the human need that made the creation necessary. At an evolutionary level this 6-pointed star formation includes a clear and compassionate understanding of that which called forth the creative act- whether personal or collective”…the radical realignment to the needs of this time. (Leyla Rael, Dane Rudhyar from Astrological Aspects)

Astrology is the listening to the Cosmic call and song. Astrologers join together to say lift your eyes to this beautiful, mysterious and synchronistic linking of above as below. The Cosmos calls us to stretch our senses of perception. Step into the timeless where wheels upon wheels unfold us in eternity. Align with the mystery of Cosmos and Psyche and move through this portal to new levels of integration with the great Feminine, She who is returning and arising. The Water Snake undulates itself into its shedding stage. Now is the time. Release the old. The New is birthing itself through the dreams of the Earth and Children, hearing the calls of the galaxy. Throw off that old skin to the skies so the twilight of this time catches it and dresses itself in the flame of the ending of this long day of evolution. Let us move into the creative Sun of our Heart and taste the elixir of the Aquarian Age, the light of greater consciousness.

0 Comments on “The Cosmic Diamond Heart of the Feminine”

This is beautifully evoked, Sue…..what a time, what a portal! It lines up with a card I made recently of a woman seeking purification, baptism, initiation…..

Moving into the gateway of the grand water trine with mercury in retrograde feels like entering a cave of vulnerability without a light at the end of the tunnel to guide the decent. The feeling was so powerful I had to stop everything to do “nothing and just be” in order to calm myself. Piercing through the intoxicating veil of actions of everyday life I experienced the peace, truth and beauty at the core of every moment that is the guiding light at the beginning and end of every tunnel I enter- consciously or not seeking union with the divine and vulnerability was the doorbell.

Moving into the gateway of the grand water trine with mercury in retrograde feels like entering a cave of vulnerability without a light at the end of the tunnel to guide the decent. The feeling was so powerful I had to stop everything to do “nothing and just be” in order to calm myself. Piercing through the intoxicating veil of actions of everyday life I experienced the peace, truth and beauty at the core of every moment that is the guiding light at the beginning and end of every tunnel I enter- consciously or not seeking union with the divine and vulnerability was the doorbell.

The intensity of this time is great, as Jupiter opposes Pluto in Capricorn, being stirred by Mercury in Cancer retrograde. It’s challenging to keep that center point. “Lighten up” is good advice from Pema Chodron, developing a sense of humor. What happens when we lighten up about the big issues that swirl around us? We can than feel that, yes, this is the terrain that we are walking through! Situations settle and we feel more clarity about action and choices. As the Native American saying goes, “Push off into the flow, don’t cling to the edges of what was.” Keep expanding our perspectives!!!

thanks sue, yes I have heard it also said as “push out into current, keep your head above water, and celebrate!”

I feel that Susan not only opens a window to the cosmos, but sees right into my soul and destiny END_OF_DOCUMENT_TOKEN_TO_BE_REPLACED

On January 8, 6-8pm PST, join Susan for a look at your navigational guide for 2022,  “Crossing the Great Divide, Imagination, Resilience, and Visionary Engagement” On Zoom. More info here, to sign up.