The Arc of Imagination

Challenges and Renewal, Astrology for 2021

A Rare Celestial Event, Jupiter and Saturn merge in the heavens, for all to see

There’s a rare celestial event taking place on Sunday! Look to the heavens for the next several nights to watch this rendezvous between the giant planets Jupiter and Saturn. 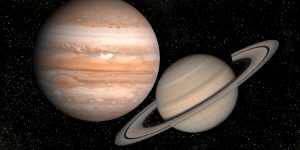 Jupiter and Saturn are conjuncting on December 21st, the day that the Sun enters Capricorn on the Winter Solstice. If you watch the night skies as I do, you may have been watching Jupiter and Saturn get closer and closer together over the last 2 years. Like some great cosmic poetry, the timing of this stellar event is taking place while the “Sun stands still” on the day of the solstice. After sunset look to the southwest to see these two starry planets. On December 21st they will be almost merged, Jupiter being the brighter of the two. It’s their first conjunction in 20 years and the closest viewable conjunction since 1226! 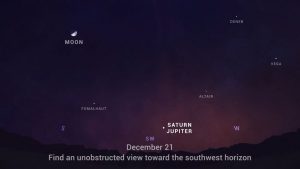 We can imagine that for centuries the peoples of the earth have celebrated and stood in respect during this darkening time, to that moment when the light returns, the sun rises at dawn in its most southern location, “standing still” (solstice) for 3 days. (Think of Newgrange in Ireland, and Stonehenge in England, the stone temple monuments aligned to the rising and the setting sun on the day of the winter solstice, built 5000 years ago by the Neolithic peoples). 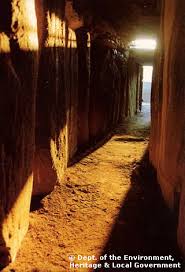 This year some magic poetry of the cosmos leads us into the deep darkness at the solstice, and gives us the promise of the return of the light, faithful in its eternal renewal, in its mystery of life while the cosmos delivers another celestial imagery of its mystery and symbol of new beginnings, the conjunction of Jupiter and Saturn. Let us look up with awe to the greater mystery in which we live, feeling the starry night to be the vault of our collective temple, here gathered on planet Earth.

Similarly we walk this passage in the culture of humanity, in a dark, polarized time, in a global pandemic time, in a racial injustice/justice time, in a earth is in crisis time. So it is that the Lord of Time (Saturn) and the Lord of Expansion (Jupiter) are destined to come together on this day, to birth a new era of 240 years. Now they conjunct in the first degree of Aquarius, in tropical astrology. Innovative and future oriented Aquarius, the Water Bearer, will predominate over this new era, imagery of the New Age. We know the image as one who pours out waters to nurture humanity with new vision and with awareness of being part of some greater wholeness. 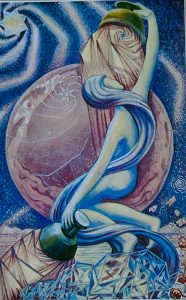 For astrologers, this celestial event is likened to a crescendo of cosmic themes which announce new beginnings, and the return of the light. This particular Jupiter Saturn conjunction is known as the Great Mutation, as Jupiter and Saturn will now continuously, every 20 years, for the next 240 years, conjunct in the air signs, Aquarius, Gemini and Libra, leaving behind the era of Earth signs. Since 1870 these two giant planets have conjuncted every 20 years in Earth signs, representing the mundane world, organization and practicality, the development of humanity’s use of the earth as a source of wealth, and the development of capitalism and industry. With the Great Mutation we refocus our priorities, moving into an era of air signs, which value creative and intellectual endeavors, original and innovative ideas, and the information age. The development of humanity will move toward a new understanding of community, the interrelatedness of everyone and everything, and the development of a consciousness of social justice.

Of course there are shadow qualities of the air element that we want to be aware of. We can see that we are already dealing with these elements, the challenges of sharing information and our different interpretations of “truth”, what is true, what is fact. We see the growth of new industry that has developed away from earth as resource for profit, to a data economy that fuels great profits. We see it in the growth of genetic engineering and innovation without the consciousness of its repercussions. (For more info on this, sign up here, for Susan’s 2021 talk).

The sign, Aquarius, carries an interesting polarity of desiring more freedom, freedom of expression in all areas, including gender expression, artistic expression, and individual expression. And yet, it is also the sign of the community, of something that is greater that the individual, about collaboration and visionary possibilities. It’s really a calling for a growth of collective awareness and consciousness to move into a more evolved state of being. So we see the growth of movements and teachings around mindfulness, meditation, and the healing of trauma. We see the younger generations more open to differences and more aware of our interrelatedness with each other, the Earth and all living beings (Greta Thunberg). The potential for humanity is great.

The year 2020 began with a dramatic planetary event (Saturn conjunct Pluto) and is closing the year with another unique planetary event (Saturn conjunct Jupiter). The celestial drama of 2020 is a year which unveils, reveals, and resets our collective consciousness in order to recreate our world anew. And as the stories of old are told, as the myths teach us over and over again, we must enter the dark to reconnect and know our souls. For our ultimate aim is to light up the world with the illumination of ensouled people. Only then will we have fully met and inhabited the light, life, and soul of this our Earth, Anima Mundi! 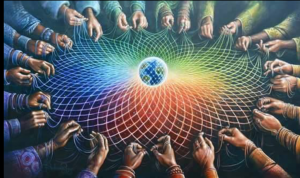 Susan Heinz is a professional astrologer in Santa Cruz for 38 years, bringing together traditional & esoteric astrology, Tarot and Qabalah. For info on her Friday monthly astrology groups, her Qabalah, astrology and or, painting classes, and for personal consultations, call (831) 479-3751, or go to www.susanheinz.com.

Sue possesses that rare gift of being able to tune in to individuals on a soul level as well as on the personality level. END_OF_DOCUMENT_TOKEN_TO_BE_REPLACED