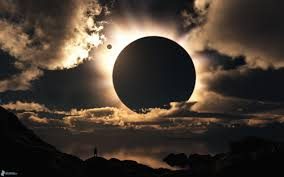 Astrology opens the door to the mystery in which we live, to the organizational patterns and living intelligence in which we are in collaboration. When we begin to imagine the event of the Solar Eclipse coming on August 21st, laying its shadowy pathway across our country starting at 10:10 am, in the Pacific coast, we wonder at this unique event.

How is it, that as the Moon passes in front of the Sun, from our point of view on Earth, it exactly covers the fiery orb of the Sun? So much so that those who stand in the Moon’s shadowy pathway, as it slices its way across the United States, become enfolded in the night sky, the greater cosmos for almost 3 minutes?

The grandeur and mystery of this is our inheritance. In the past it was frightening to the people of the Earth and so it became the portent of disastrous events. (The root of the word disastrous is ill starred). Many of us can feel that history in our cells. Perception evolves with consciousness. Now the Solar Eclipse is a thing of wonder, when during the bright of day we enter the deep starry night for several minutes. A curtain lifts to the greater cosmos, a lyrical poetry within which we live, the song of the universe. This is a moment to enlarge our understanding, an opportunity to stretch our limited, contracted view of life, and reconnect to an essential truth of existence, which lives in all of us. A time for remembering.

The Solar Eclipse takes place at the New Moon, when there is an exact alignment of Sun, Moon and Earth. This takes place twice a year as the eclipse pathway falls upon different regions of Earth. The last time we had a total eclipse across the USA was in 1918, though certainly there has been partial eclipses touching parts of our continent since then. If you are outside of the eclipse pathway slicing through Oregon, Utah and on through to the Carolinas, you will see at least a 75% coverage. There won’t be the dramatic ring of radiant light around the Moon, nor the emergence of night and stars.

This powerful alignment of Sun, Moon, and Earth can heighten our emotional sensitivity. When the Moon covers the Sun and casts a shadow, we are entering collective and personal shadow material. The subconscious patterning, or reactive impulsive behavioral becomes more predominant. Issues from the past may surface, especially in the area of life described by the sign Leo, our ability to be open hearted, our creative expression, our needs for validation and recognition, leadership issues, and our ability, or challenge, in fully being ourselves. All of us will experience shades of this. It particularly becomes an issue, bringing about events, in the country that the eclipse shadow is crossing, this time in the USA.

The Solar Eclipse becomes a trigger to hidden issues when it contacts planets or angles in one’s own chart or the country’s chart. Then it shines a light on those hidden issues, places of denial, or subconscious attitudes. The Eclipse takes place at 28 Leo, almost 29 degrees Leo. The orb of influence over ones planet or angle would be 1-½ degrees, ranging from 27 Leo to 1 Virgo. It will then trigger the archetypal issue of that planet.

Many people experience the energy of the eclipses as overwhelming, a lot of stimuli on a subtle level. It’s a good idea to be aware of heightened sensitivity and not to over schedule yourself, to meditate and ground yourself.

The eclipse is a 3-day event, the day before, the day of, and the day after. We can imagine that we are entering sacred time. Sacred time has the quality of inner and outer, multi dimensions, a time of soul. Because of this it is opportune for us to retreat, to do ritual that sets an intention to honor the soul and its alignment with Earth and sky, feeling into the soul’s desire to express one’s deeper self. We might gather with like minds, share being in the present, and sense into our time in a new way, especially for those of us in the USA. The total eclipse suddenly turns day into starry night and we glimpse a view beyond the appearances of our busy days into the World behind the World. Humanity, and especially Americans, are having an opportunity to open their hearts, to enlarge their ability to perceive through the heart.

We enter the mythic imagination of this great starry world; feel the lineages of stargazers who were able to experience the greater perceptual powers and dimensions of intelligence and origins. We may liken this alignment to a more perfect alignment of consciousness (the Sun), the physical body and personality (the Earth) and our unconscious, even the collective unconscious (the Moon). If there is an obstruction preventing you from greater consciousness and fuller embodiment of your unique being, meaning, and purpose, then the eclipse can illuminate it (particularly if it falls on a planet or angle in your chart). It is then be a life-changing event. If you feel an obstructing or limiting situation or mental/emotional state, you can go to the root of this shadow quality within yourself to transform its presence.

The Eclipse, the USA and the Trump Presidency

Sometimes the eclipse can bring to the surface an area of life (or part of your psyche) that you are hiding or in denial about, as it did for Bill Clinton in 1998 when the Solar Eclipse fell on his Sun in August. By October (When Mars crossed the eclipse degree) the House Judiciary Committee started looking into Impeachment proceedings. Interestingly, this eclipse is taking place at the same degree as the one in 1998.

The story that is unfolding with this eclipse is particularly unique for us living in the USA. It heightens and intensifies events taking place in our country. We can view it mythically. Even now events are taking on mythic proportions. A great shadow has fallen across the United States and millions of us will consciously experience and see it. Quite amazingly this Solar Eclipse triggers Donald Trump’s chart in a most dramatic way. In fact, the election of Trump, initiated us into the shadow of the USA. Those qualities that have gone to extreme in our culture, that separate and polarize, that hate and blame, along with the aspect of shadow that represents that which has been cast out, minimized, oppressed, and doesn’t fit the dominant value system, now have risen. The Trump Presidency and administration has brought out that which has been in the shadows. (See article, http://susanheinz.com/awakening-usa-destiny-donald-trump/ ). It shows us the unimaginative culture that has evolved to extreme, but can’t move us forward; its stuckness, and its extreme polarization. The shadow carries many themes, both what has been repressed, and as well as values that are extremes of the old paradigm, profit, and rigid, narrow views, hierarchal control, domination by corporate businesses and those who are white, wealthy and male. This administration is the grasp of the dying macho extreme of capitalism and repressed feminine values. Yet it’s because of its extremes the pendulum will begin to swing toward bipartisanship, compassion, unity, and the understanding that everything is interrelated, the realization that this Earth is a living system. Winning as defined by the old guard (Make America Great Again) is really the most superficial value of an empty unimagined world.

The Solar Eclipse falls on Trump’s Leo Ascendant and his Leo Mars. Having Mars on his Ascendant shows his impulsive, conflictual, competitive nature, his pride in take action nature. His rising sign, Leo, characterizes his great need for admiration, attention, and loyalty. He was born with the Royal Star, Regulus on his Rising, as such he would be destined for great success and great weakness. In the tradition of star-lore, Regulus is said to be the King Maker, a king who will have a fall from grace if he participates in ‘revenge’. Trump has made an art of revenge.

When the Solar Eclipse falls on his Mars Leo ascendant something hidden will be revealed. We are already into the buildup of that. It will be very difficult for Trump to control his impulses to thrash out, attack and blame. The Mars Rising also indicates Trump’s love of macho men, especially Generals. Yet Generals are able to discipline (Saturn) their actions (Mars). Trump has no such ability. General John Kelly does have Saturn and Mars conjunct in Virgo, indicating his discipline, control, and meticulousness. We will see that for awhile Trump can appreciate Kelly but later Kelly’s impact will be too constructing for Trump and he will rebel. It is not unlikely that impeachment may begin or some greater fall may take place.

Astrologers watch when Mars crosses the eclipse point as it activates it dramatically. This will be on September 2nd and 3rd. (When Mars passed over the eclipse point in 1998 is when impeachment proceeding began during the Clinton Presidency). Interestingly enough, Mercury is retrograde during this time and goes direct on the exact degree of the eclipse and exactly when Mars crosses that degree. This is a time of threshold struggle, an encounter with an opposite. The Mercury retrograde cycle calls on us to review, refine, and tap into the inner landscape, so when it goes direct it can give birth to new ideas, and explores fresh alternatives. It’s a time of great importance to pay attention to and observe, as it goes direct during the 1st week of September. The conjunction with Mars links it up to communication, something forcefully being expressed or revealed. (Watch those tweets, if you care to!). The eclipse is also exactly trine Uranus in Aries, allowing for breakdown or breakthrough.

What is important for us to know is that the USA created Trump, formed and approved of his values, supported his brashness, his lies and directness. A large portion of the population exalted in his ascendency to bring down the government, as well as the educated, intellectual, liberal elite in power. This is a situation we all need to bring to our attention. What has Capitalism cultivated? What have our values and life styles cultivated? What kind of consciousness and extreme polarization has been cultivated? We are in the thick of collective shadow material. The cosmos unfolds the story of the shadowy material across the Untied States for all of us to see and at the same time, opens us to the great mystery in which we live, our very origins.

Let us be opened into honoring this time, the sacred intelligence in which we live, in order to heal and reintegrate into wholeness, into greater compassion and understanding of the profound interrelatedness in which we live. The Solar Eclipse of 2017, in the sign of Leo, takes place in the sign of the heart, aligning with the Royal Star Regulus. Let new levels of integration take place in our heart. May our hearts open to the greater soul of both our being and the cosmos, and lead our minds as we seek to cross the bridge into a new world, into a life sustaining Earth and compassionate Humanity.

3 Comments on “The August Solar Eclipse”

Thank you 😊
A great and educational read

Great information about holding the space for knowledge and information and looking at what we are and what we become next.

I feel that Susan not only opens a window to the cosmos, but sees right into my soul and destiny END_OF_DOCUMENT_TOKEN_TO_BE_REPLACED